The Importance of Farmers’ Markets

A few years ago, a local market was formed that holds once a week (Saturdays) during the growing seasons about 10 miles from my house in Ojo Caliente, which is close for around here. Typically, there are 6 booths, which is up from the 3 that started it. Several of the booths sell out of most produce by the time they are ready to pack up, because our little community supports them. But another thing I love about this small market is that the farmers want people to share in their food, so they often give away samples, or even put an extra peach or pepper or carrot in your bag. The fresher the food, the better it tastes.

$16 for: Tomatoes! and three minipears.

My man and I also try to support the larger market near where we work in Los Alamos. This means hauling an ice chest to work to keep the produce throughout the day, but it is well worth it. They meet on Thursdays and my man usually goes. This past week he got there late and had not taken out extra cash for the market and only had $16 on him. Nearly every booth was selling tomatoes. A WIDE variety of tomatoes. He called me to see how I felt Bout him buying $16 worth of tomatoes. Hell, Yeah!

I know i have some Green Zebras here. The striped red are a variety developed locally.

These are beauties. Folks were selling them for $3/lb but most vendors threw in a little extra since they were getting ready to pack up. The difference in flavors is amazing. The little round deep red & purple ones we just simply ate, like you would fruit. That night, for dinner we had chopped up tomatoes with cubed mozzarella and a little salt and olive oil. It was incredibly good. 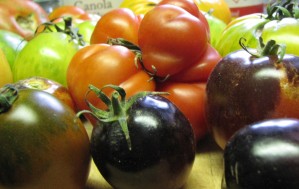 Look at this crazy red tomato?!?

Error: Twitter did not respond. Please wait a few minutes and refresh this page.