While we have only been gardening for 3 years, each year is different. This year, a late May frost killed off what we had started (squash, tomatoes, peppers), but we started over. And early October frost further shortened the growing season, meaning the tomatoes got to ripen in the sunroom. This was also a plentiful year for fruit, so I will be including that harvest in this post too. While it is a long post, there are plenty of pictures for those who just want to skim it.

We finally got healthy blossoms in the fall.

This year was our first year that the corn was incredibly bountiful. We ate our fill, froze some, and roasted the rest and hung them in ristras to dry into chicos. That roasted corn flavor is a welcome addition to beans and stews. We experimented with 25 kernels of Giant Peruvian corn  and found it too tall for easy harvesting and many of the cobs did not reach maturity before the first harsh freeze hit. Personally, we really liked our corn though much of it wasn’t sweet corn. We planted a variety, which means nearly all of it was mixed as corn cross breeds and we can’t be sure kernel by kernel without genetic testing. The chico ristras are quite beautiful and that roasted corn flavor in stews and green chile sauces is incredible. 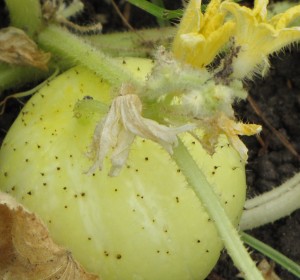 So many lemon cucumbers this year.

All of the squash plants we had started indoors and planted in May died during the frost of the last May weekend. So, we planted seeds, which sprouted and were promptly devoured by squash beetles. Sigh….We planted more squash, which grew and blossomed just in time for the October frost. Yep, this year we ate squash blossoms instead of squash. We also, inadvertently, planted several birdhouse gourd plants, which loved climbing 6+ feet up the corn stalks. At first we were excited because the shape resembles butternut squash, which we wanted. But then it became apparent they were gourds. The October frost hit, killing the plants, so I harvested them and set them to dry out in the sunroom on a table. Instead, they went moldy, which was unexpected because of the dry weather on top of dry climate. All gourds were returned to nature to make do with the winter as they best can. We also grew 2 kinds of cucumbers (lemon and straight 8) which both did well. A bowl of rice with cucumber and tomato and little hard cheese became a favorite lunch. We also tried growing 6 little melon plants, 3 of which died right away, 2 were eaten, and the third finally succumbed to Evil October Frost. So, no melons. And we planted some decorative gourds on purpose in 1 specific location, but they didn’t have a chance to mature either. So, no gourd ornaments for Winter celebrations this year. We did get 3 little pumpkins before the frost, but they also went moldy.

We grew many, many tomatoes indoors before planting them outside. We had some friends out in May and we planted as many as we could that weekend, along with some chile peppers. Then the Vile May Frost hit. Luckily, we had several plants still in the sunroom and I started a few more from seeds. Overall, the Amish Paste variety did very well. There were a few others that made it to harvest too, but the plants proved to be hardier than my labels. I tried both wood popsicle sticks and plastic labels, both of which had a tendency to pop out of the ground or break in half.

Just a slice of our green tomatoes.

I also planted 2 varieties of tomatillos (purple and Rio Grande verde). What I harvested turned out to be green. The tomatillos also suffered much more from caterpillars than the tomatoes. If I understand correctly, it is the same caterpillar species that feeds on tomatoes, tomatillos, and corn. The October frost hit one night and we both had to go to work the next morning. I got home first and noticed a very sad garden as I was feeding the goats and donkeys. As I investigated, I noted that the plants were dead but much of the produce was still harvestable. So, there I was well into night, flashlight in mouth, picking tomatoes, peppers, tomatillos, and beans. The dried beans and corn waited until the weekend.

These tomatillos are still in their wrappers, and this caterpillar is escaping.

In peppers we planted a variety of hot, because we love our chile, and also a variety of sweet bellpeppers. The sweet peppers did not have enough time to be orange or purple – they were all harvested as green. We also found 2 small purple peppers and I could not find a label for these guys. I also don’t recall planting wee purple peppers. So, possibly these were some freebie seeds that were mixed in with other pepper seeds. As you can see in the picture, we bought some jalapenos from the Farmers’ Market. I decided to roast them all on the grill. This was my first time using the grill, and it was very, very easy. Truly, a spouse who gets asked to make dinner on the grill is getting off light. If I had been a fully productive person, I would then have peeled and chopped before bagging and freezing. As it was, I only had so many hours that day and lots of food to process before it spoiled, so roasted, cooled, and into freezer bags.

Our wild plums along the ditch bank bloomed like crazy this year, went to fruit, and then Evil May Frost happened, killing 90% of the fruit, along with my choke cherries. Sniffle. Still, of the few wild plums that made full fruit, it was plenty to keep me busy for the weekend. I harvested, washed, sliced in half (removing pit) and put in freezer bags. The juice was so tart and sweet, I couldn’t stop licking my fingers. Excellence we will enjoy all winter. This was our first year that the currant bushes, mixed in with the choke cherries, made fruit. Tiny little berries = lots of work = scrumptiousness. We made 2 little pots over 2 weekends of these little berries cooked down with a little bit of honey. Great on waffles, icecream, crackers and cheese, etc.

We tried to grow carrots, basil, and onions with our tomatoes in the spirit of companion planting. However, we only managed 1 sad basil plant, some few onions, and no carrots bigger than my thumb. We will try again next year. I have not had much luck with herbs and I think I will experiment with starting them inside in the spring, harden them on the porch, and then move then to the garden, instead of planting the seed directly in the ground.

Our few carrots and onions.

The beans did well this year, though not as many as the past two years. See, we allowed a few chickens to run in the garden this year and many bean blossoms were eaten. We had this chicken who was not recovering from her molt and the other chickens were less than pleasant to her, so Little Red Garden Chicken was my garden buddy for several weeks. She is fully recovered and we got enough beans to be happy. We planted many, many varieties, not all of which came up. My speckled bean project grew enough for us to enjoy a few in a mixed bean stew. Hooray! 3 years ago, we planted some black beans. They grew well and when harvested the black been pods also produced 13 speckled beans (pink with black spots). So, these last 2 years I grew them and this year had enough to eat, and they taste great.

This was our first year planting peas. I loved these peas and they kept on giving. Some of the pea plants did not die until the October frost. Most folks around here plant peas in the spring, harvest, plant again in summer, and harvest again in the fall. But ours kept flowering and producing. Next year, if we have enough water for a garden, I will be planting many more peas.

This was the first batch of grapes to be processed, roughly 40 pounds.

Fruit did well everywhere in northern NM this year. From my parents’ place, we harvested and processed roughly 80 pounds of grapes. Some were eaten outright. Many were boiled down and then frozen or made into desserts right away. What remained, I fed to my chickens. We also picked many many apples for eating and for the donkeys, goats, and chickens. They make a great treat and also add nutrition in the fall when their normal fare is getting scarce. My parents also have 2 peach trees, each a different variety, that blossomed and fruited for the first time in over a decade. I harvested as many as I could and put gallons away in the freezer. The peaches were no bigger than apricots, but so very flavorful. M3’s cousins have a very large apricot tree that fruited like crazy, so some of those also ended up in our bellies and in the freezer. Yes, this winter we will not be lacking for fruit.

This young Cornish game cock was stealing peaches from the buckets on the porch.

We tried growing potatoes this year in two areas. The area taken over by sunflowers did not produce any potatoes at all. I read some where that potatoes and sunflowers detest each other. I now believe this to be true. In another area, we got this small handful of potatoes. So, I put them back into the ground to perhaps grow next year and be more prosperous.

We were also lucky to get a few berries from the strawberry and raspberry plants planted early this year. Small, but incredibly tasty. I allowed these wild sunflowers to grow in the berry patch. At first I waffled about whether or not to rip them out because so many things dislike sunflowers for neighbors. But my berries thrived and since the strawberries had shade throughout the growing season, they kept on fruiting. I really look forward to seeing what they do in 2 or 3 years once they are fully established. They are also planted in an area that receives our grey water. 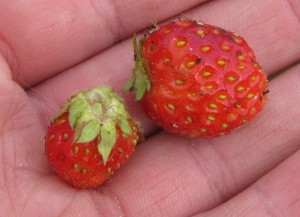 We planted rutabagas, turnips, radishes, and beets this year. The beets didn’t do anything – perhaps old seed. The radishes came in well and once we were tired of them, I allowed garden chicken to graze on them. The radishes made a nice appetizer cut small and tossed in salt with some lime juice. If you want a flavor pow without calories, this is a great little dish. We had so many turnips this year, that we were able to cube some and put in the freezer. They were great cubed, tossed in olive oil, add salt and pepper, and roasted like you would fries. Piping hot, they were absolutely delicious. 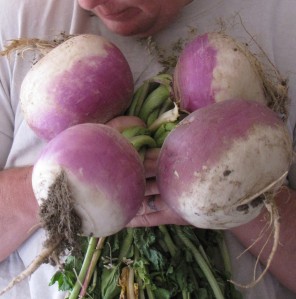 A bouquet of turnips for the farm wife.

Error: Twitter did not respond. Please wait a few minutes and refresh this page.